Over dinner on Saturday night, my Auntie Christine apologised for forgetting to congratulate me on being mentioned in the Telegraph in December. I said I didn’t mind in the slightest – not least because I had no idea what she was talking about.

Apparently my ‘Just Back’ travel-writing competition entry, which told the tale of a trip to Shropshire an hour from my home, had been shortlisted by deputy travel editor Michael Kerr as one of the five “outstanding entries” of 2010.

This came as a welcome surprise on an already happy occasion. The reason Auntie Christine had forgotten to tell me was because our first encounter of 2011 was in the Intensive Therapy Unit at the Norfolk & Norwich University Hospital, where her mother was not expected to survive the night. Along with the rest of our family, we’d spent a week camped out in the waiting room, taking turns to sit by Gran’s bedside and squeeze her unresponsive hand, learning the painful way what each of the coloured waves on her life-support monitor meant.

But despite those unpromising lines and the doctors’ sympathetic half-smiles, Gran was perched beside me at the Indian restaurant on Saturday, napkin tucked into her new silk blouse, making great in-roads into a plate of chicken tikka masala, lemon rice and a peshwari naan.

So that was the real celebration of the evening! Hearing about the travel-writing competition made it even sweeter. 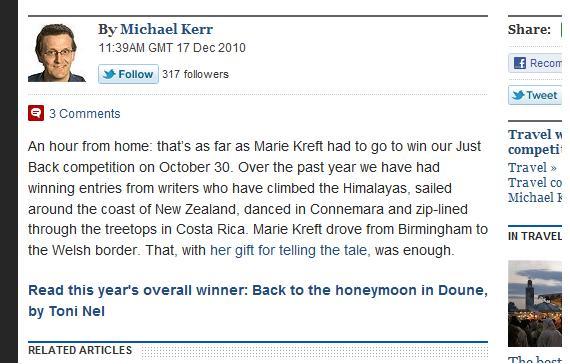 I was honoured to be asked to write a guest post for the Essential Travel blog. This is what I submitted: ‘Escaping “museum legs” at Il Giardino di Daniel Spoerri’. The photographs are mine too. 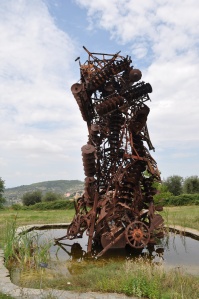